The Riddlebox 120k: No Prep, Dehydration and Funny Hats

Generally, I like plenty of time to plan and think about events. With this spring's Almanzo, I was obsessing about the details for months. The Riddlebox was something else entirely. Through some lurking about on Facebook, I stumbled upon this ride four days before it was set to start. I jokingly posted the notice to the Brothers Bike shop page, and tried to put the event out of my mind.Though the ride was only 30 miles from my house I was certain that taking off for the weekend and the cost for the registration would make this event impossible. Shortly afterwards, my wife texted me:

K: Do you want to do the ride, say yes because I know you'd be lying if you said otherwise
N: Yes, but registration is $60
K: Do it, Merry Christmas

Having been properly green lit, I promptly began to panic about clothing like some teenager before a first date. I'd only done very short rides below freezing, and very little in the sub-20 range that this race was forecast to start in. Though some cobbling and last minute thrift store digging, I managed to put together an outfit that seemed likely to keep me from simultaneously getting frostbite and overheating.

Working from top down and inside to out:
Balaclava
Heavy weight synthetic base
Bike Jersey (mostly for pockets to keep water bottles thawed)
Columbia winter coat

2x Wool socks
Cycling shoes (Old pair of Doc Martins. I've got something like 2000 miles on them, I'll say they work)

A few test runs in the days coming up the ride made me reasonably confident that I could be comfortable on the bike for a day. Unfortunately, it also showed me how out of shape I had become since the Omaha Jackrabbit back in October. The goal for this ride would be simple survival. 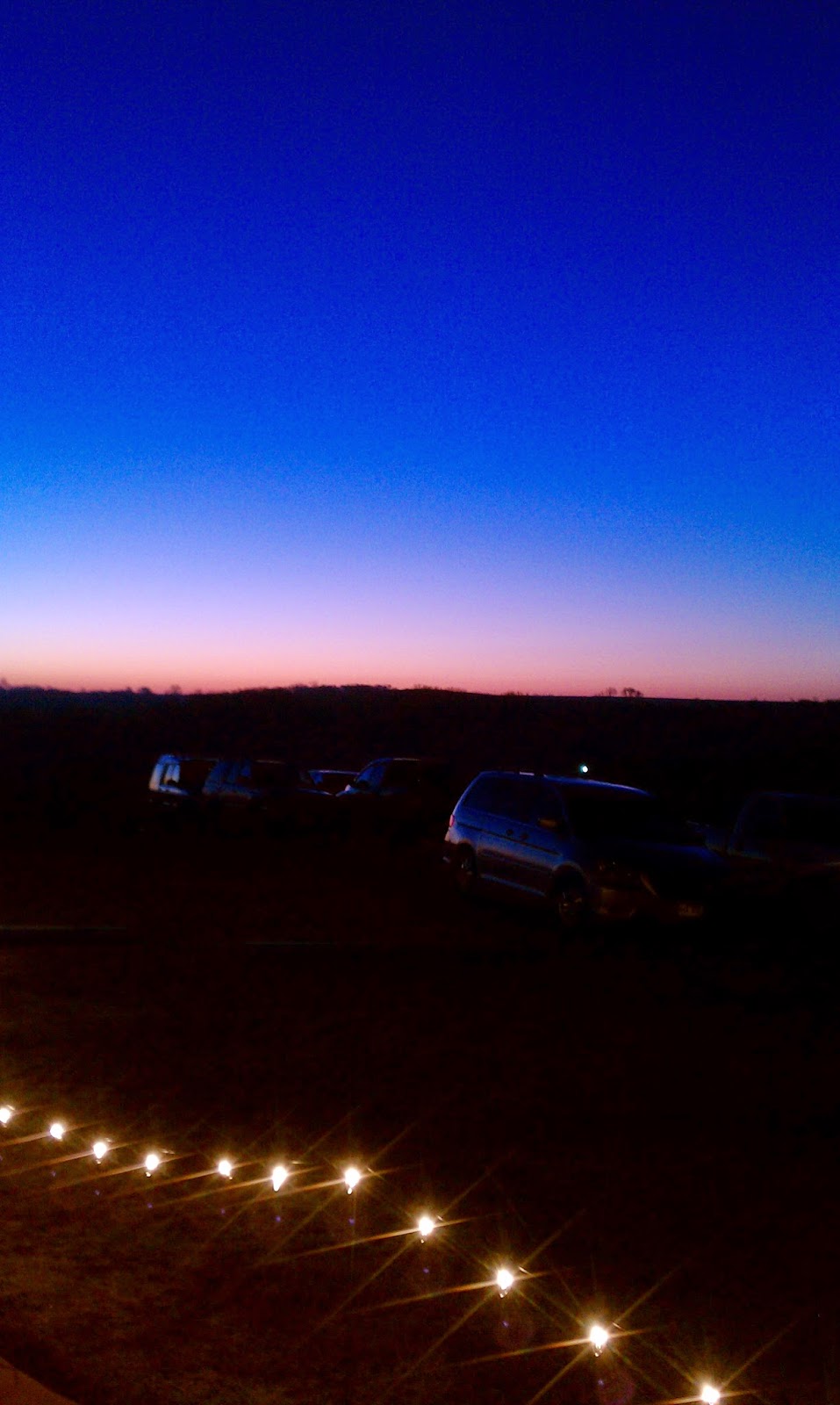 The day started early, alarm went off at 5:30. Sleeping at home before a big event definitely has its perks. It was almost surreal to be traveling very familiar roads to ride in very different conditions and with a group of complete strangers.

The start location was Calico Skies Winery. With the large banquet hall it was an excellent place to start and finish. In addition to the 120k ride, there was a 50k ride and a 50k run. The 120k riders started first, and with a field of only 7 riders, it was a pretty calm and quiet start.
Unlike any other ride I've done, this ride got to business immediately. We turned right from the start down a steep downhill, slammed on the brakes to cross a highway, biked 100 yards then hike-a-biked a frozen river, and hit a 5% grade climb all in the first mile. If I was at all chilly at the start, I was well on my way to overheating already.

My body quickly went into what can scientifically be described as a freakout. My lower body was chilly, upper body was overheating, and my heart rate and breathing were way beyond what I could sustain for any length of time. After trying, and failing to slow my pace down, I realized that I was subconsciously chasing the riders a quarter mile ahead of me. I forced myself to stare at the road immediately in front of me and forget about those riders to get myself settled into a 75 mile pace.

One of the big issues coming into this ride was water, more specifically keeping it from freezing. Most riders use Camelbaks for rides like this. If you load them with warm water or wear them under your outer layer, they generally stay thawed. I was using my standard bottles. The plan was to keep one in the cage and one in my jersey pocket, and cycle them in and out as needed. That was good in concept, but had some issues:

1) The bottles would freeze faster than my body heat could thaw them. I could put both in my pockets but...
2) With clumsy gloved hands, I could not get the bottles from my pockets without stopping and fully unzipping my coat.

This naturally resulted in not drinking enough water. While you don't sweat as much as you would on say, RAGBRAI, the cold dry air makes your body loose water rapidly though respiration. After doing a few events like these, I've learned some lessons about what my body needs for food and fuel. With my hands hampered by gloves, I was eating and drinking way less than I should have.

My second big mistake was passing up on a chance to fill water bottles in Hudson at mile 17. While I had drank only about a 1/3 of my water, it was another 35 miles to Canton and my next chance to top off. I misjudged my water needs and kept riding, again foolishly trying to catch some riders ahead of me. 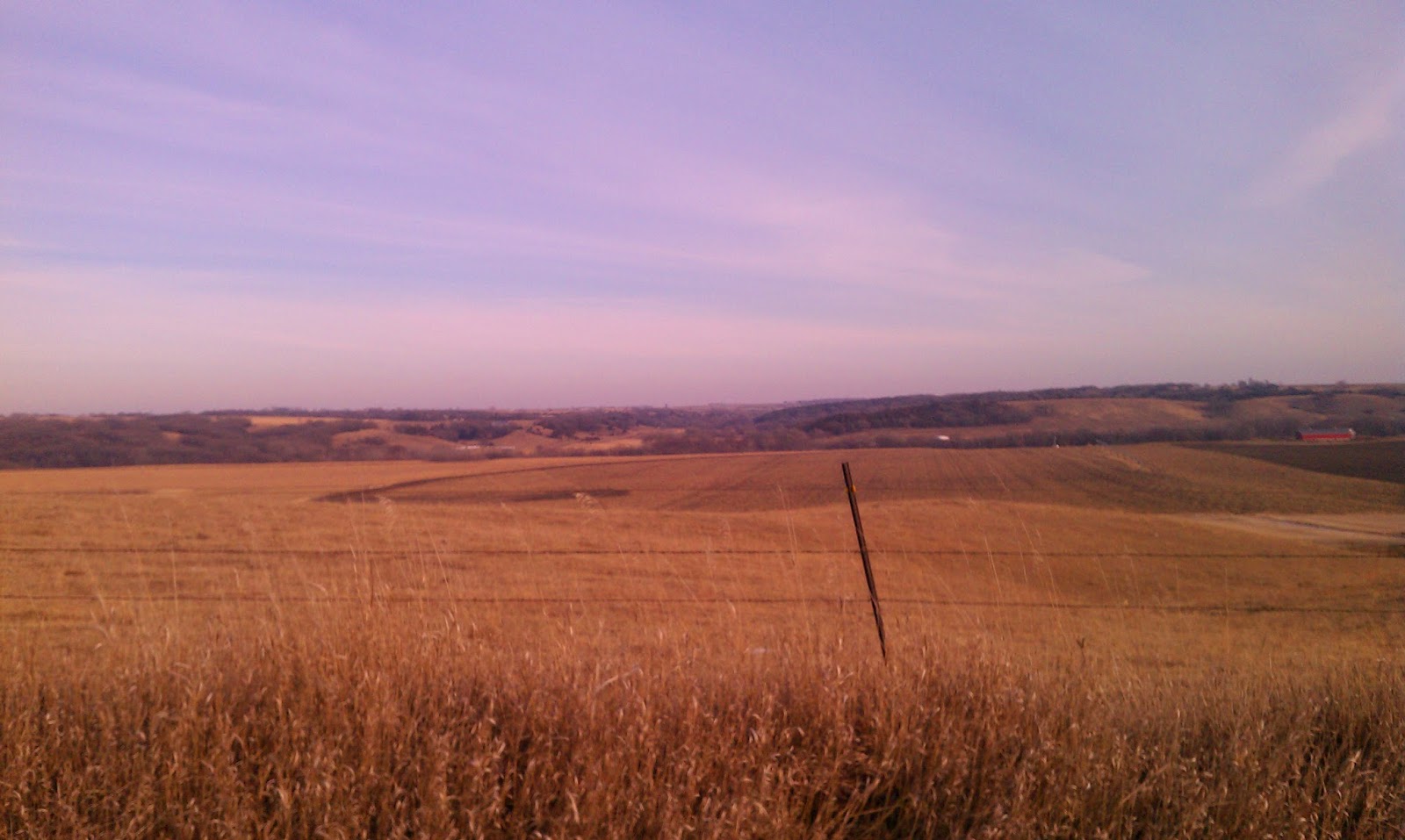 The middle section of the ride was tough. I wasn't drinking enough, and had fogetten elctrolytes, so my legs were burning and threatening to cramp. My mental state was also hitting a low point. This usually happens with most of my big rides. By the halfway point my legs are starting to feel the miles and I begin to wonder if I'll be able to finish. This time the low hit worse than usual because the ride was "only" 75 miles. 75 miles should be easy, right? It did not help that when I rolled into Canton at mile 55 I would only be 6 miles from the start as the crow flies. It was mighty tempting to cut the last 20 mile loop from the course and call it a day.

The C-store in Canton was our only control for this ride. We simply had to buy something and get a receipt to prove that we had been at point in the course. I took a liter of Coke and some water and grabbed a patch of sun on the side of the station. I knew I was 6th out of 7, assuming the guy behind me (who I had not seen since the start) hadn't decided to quit and move me to dead last by default. I knew that the final miles would be hilly, that the miles before those would be into a head wind. I knew that even with the magic restorative powers of Coke I would have to fight to finish those last miles. I could ride six miles and be done, stop the hurt and go home.

But it was a beautiful day, the sun had come out and the temps were hovering around the freezing mark. It was just 20 miles, nothing I hadn't done before.

Remarkably, what saved me was simple selfishness. I had seen the prizes for finishers, and I wanted
some of that swag. I couldn't have it if I didn't finish. DFL beats DNF, right?

So a few minutes later I was rolling out of town.

The last chunk went by in a blur. I was crawling, rarely breaking 13 mph. I got briefly off course, not helped by South Dakota not putting street signs in all-gravel intersections. I'll admit to walking a few of those last hills, and crawling up the rest. I was overheated a good portion of the time, and cursed my lack of training all of the time.

The relief of the finish put a pleasant glow over the final miles, which included another frozen river crossing, and a barely passable B-Road. Finishes are always strangely sudden. There's the anticipation of the start, the middle slogging doubt, the hope of the end, and then you're done.

Perhaps the highlight of the whole day came after the ride. The aforementioned 50 k runners were still trickling in, and we waited for them to finish before the awards and goodies were handed out. I found myself eating and talking with perhaps the most experienced winter bikers I have ever met. I spent some time talking  with Joe and Tina Stiller, who ride with the FCA Endurance Team as well as Lance Andre who is the race manager for the Triple D out of Dubuque, IA.

The Riddlebox was definitely not my best day on the bike. My average speed on the course was something like 11 mph. But given my lack of prep and experience operating in those low temps, I feel pretty good about it.