Are you afraid of the dark?

After a late August and early where I struggled to stay motivated in my training, I feel like I'm back in the groove this week. The humidity is finally starting to ease up, daytime highs are more mild, and the mornings have a lovely crispness to them that I've missed.

All these good things come at a price, and that price is shorter days. Specifically, my early morning training rides (5:30-6:30am) now take place entirely in the dark. In the heights of summer I wouldn't even bother with a taillight, now I'm running full headlight/taillight and wishing I had some reflective gear to strap on. I plan on quitting the early morning rides (switch to running) after the century ride I have scheduled Sept 28, but that leaves me two weeks where I need to be on the bike every day.

The darkness has cut my options for routes dramatically. My small town is about 3 miles long, maybe a mile wide. There are a fair number of quiet, well lit streets to pick from, but it's tough to get more than a half mile without turning or stopping.

Having a broken up route is annoying, but the bigger issue is visibility. I have a half-watt taillight and headlight from Planet bike. I find this setup perfectly sufficient while in town where my visibility is augmented by streetlights.  Beyond the streetlights, I start feeling very, very vulnerable. My biggest fear is meeting a car and becoming difficult to see for overtaking traffic. I've snagged a reflective vest from the cycling section of the local hardware store, I guess it'll be an improvement, but I don't know if it'll be enough to be out riding without feeling invisible.

How about you? Any recommendations for riding in traffic in the dark?
Posted by Nathan at 11:29 AM No comments:

Carry the weight of the world

As I've mentioned before, my wife and I are blessed with two small children. Our daughter E is 3 1/2, our son O is about 10 months old. When O turned 8, we judged that his head control was good enough to go into our Bobike mini, which we had also used with E until she outgrew it. All was well, until my wife K tried hauling E as well.

First we tried the trailer. E found this incredibly uncomfortable, and the limited 5 speed gearing on K's Raleigh mixte made pulling the weight difficult. We bought a cheap rack mounted child seat. E loved it, but the weight was still an issue, and K reported feeling the bike frame twist under the strain. K also wanted to be able to run errands, but the combined weight of children and cargo was way beyond what K or her bike could handle.

So we researched cargo bikes. We needed a bike that could:
1. Haul multiple, growing children safely. It needed to have a low step over, low gearing, and preferably have a double kickstand.
2. Manage significant amounts of cargo (groceries mostly)
3. Fit both K and myself. She's 5'7", I'm 6'3".
4. Be affordable, it was unlikely that we could swing anything above $1000.

We tossed around every permutation we could find. First up was a Workcycles Fr8 (pronounced "freight")


K wanted one desperately but spending 2500 to buy and outfit that bike was out of the question.

A bakfiets was also discarded for the same reason, though we both tried every justification to make such a purchase possible.

Our options were starting to thin out. I thought about converting an old MTB to an xtracycle, but K discarded that due to stepover issues, and I knew it would be tough to find a stepthrough frame that would fit us both without twisting like a noodle.

The remaining option was a longtail. Both the Yuba and Surly models have been around for a few years, both receiving rave reviews from the families that use them. Both would run well over $1500 to $2000. K and I had pretty much given up at this point, but resolved to keep saving money towards some sort of solution.

Then, while digging through the J&B catalog searching for a folding bike for a customer, I noticed that Sun made a longtail, called the Atlas Cargo. 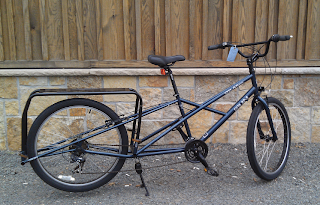 More digging showed that this longtail was also compatible with xtracycle parts. The step over is the lowest of any longtail, and it was compatible with the Bobike mini. Most attractive was the price, somewhere in the $650s for a complete bike. We would need to get a new rear seat, a Yepp, but that was a cost we were expecting.

Still more digging did turn up some concerns. Various buyers noted poor quality welds, and the components were very cheap. But users also noticed that the Atlas was one of the easiest handling longtails, and it's unisex/one size design would fit both K and myself.

K and I decided to go for it, and that's when things got complicated. There were exactly two left in the country, both down in Birmingham. Nothing against Birmingham, but it's rather expensive to ship a giant bike from Alabama to Iowa. My boss at the bike shop starting making some calls, and found that Varsity Bike and Transit in Minneapolis had one in stock, and they were willing to hold it for me if I wanted it. In a freakish coincidence, K and I were planning on heading up to the Twin Cities that very weekend to attend the state fair.

Pick-up at the shop was a bit of a blur. Varsity is a block north of the U of Minn, and students were swarming the area and packing into the shop. After waiting in this very cool shop for a bit, one of the wrenches wheeled up with the bike. A quick spin around the block confirmed that this was a very, very smooth bike, precise in handling, if a bit (understandably) wide around the turns.

Some Tetris style packing into the minivan, and we were on our way.

Now we are in a bit of a holding pattern. We're waiting on panniers and a part for the Yepp seat. Once those parts are in place, I'll be letting you know our thoughts.

Posted by Nathan at 9:55 AM No comments: