I've heard the Almanzo described as "just a bike ride, with 1400 of your closest friends." While there was some quickly, perfectly formed friendships, there was also some very lonely miles. I had elation, terror, exhaustion and peace in the space of the day, and not in the order that you might expect. Before we get to details, lets lay down some basics. 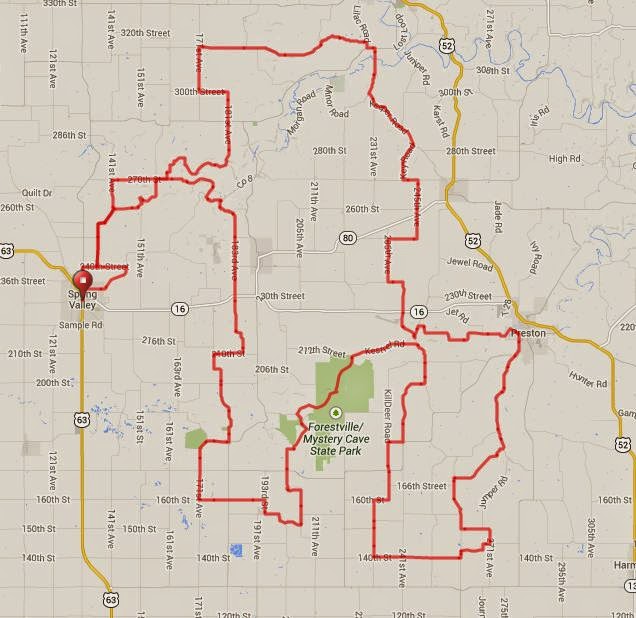 The Almanzo is a 100 mile, unsupported (sorta) gravel ride in southeastern MN. It's lovely part of the world that also happens to be rather hilly.

As stated, the ride is on gravel roads. But there are different kinds of gravel, depending on local geology. This ended dealing me a pleasant surprise, because the gravel in SE MN is noticeably easier to ride on than the gravel in NW IA. The Almanzo gravel is chalky, with flatter stones. It often packs down to a hard pan that's smoother than many paved roads, while the flat stones made even the loose sections easier to manage. That said, I have never had a ride so test my ability to handle a bike. On occasion (especially on corners) the gravel got sandbox loose. Also, all that climbing made for some blazing fast descents, and even with heavy use of the brakes I had a difficult time keeping my speed under 30. 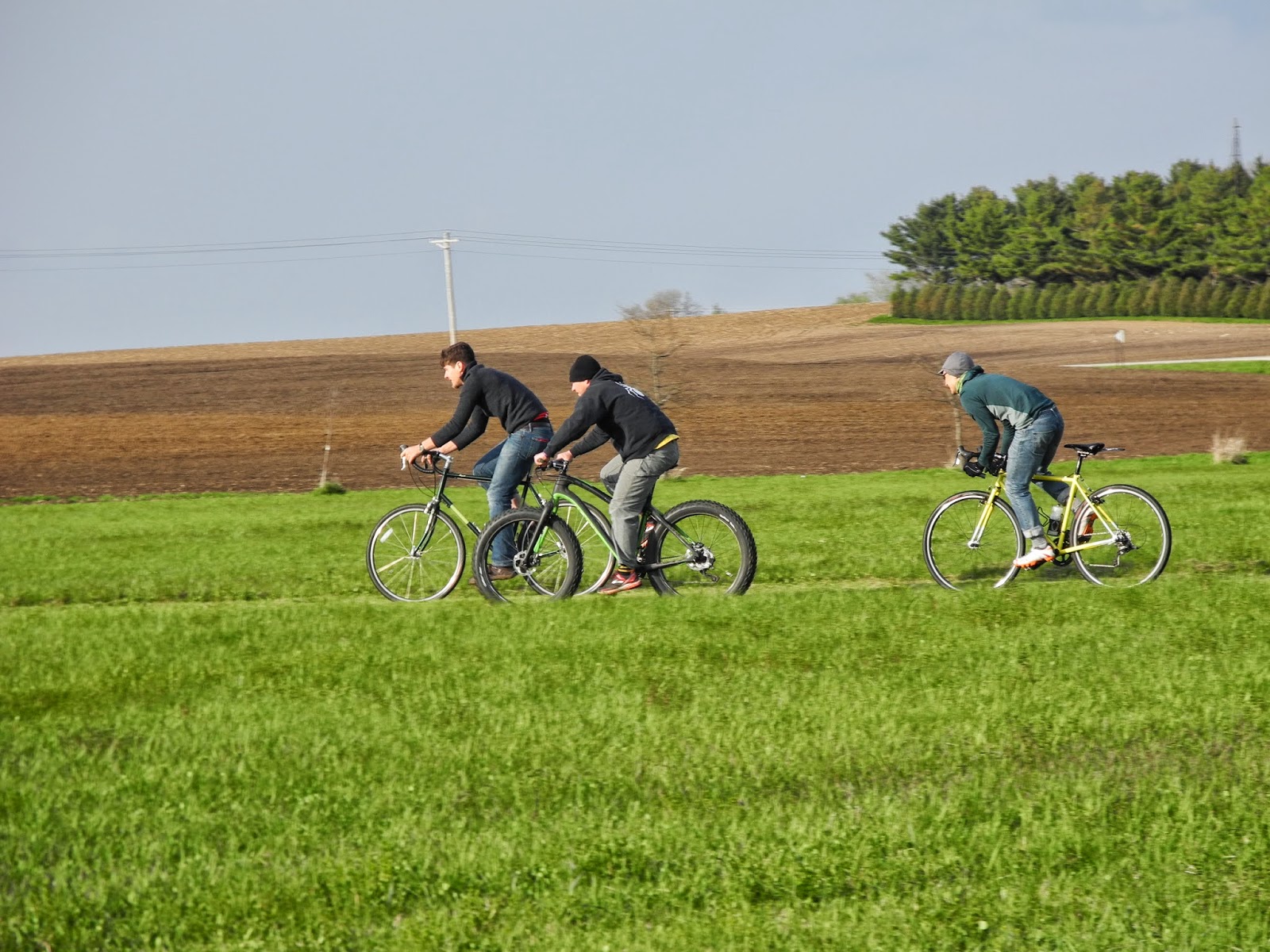 While it's common practice to hold registration for bike events the night before, I'll dare to bet this is the only one that had free-for-all grass track racing. Somehow I though this would be a good idea, so I did participate in a few rounds. This was not a terribly serious event. At one point a singlespeed Schwinn banana-seat bike was winning against a couple of fatbikes and a few CX bikes.  Unfortunately participation was fairly low, I think many riders did not want to risk injury or damage to their persons or bikes. They missed out on some proper nonsense.

After spending a very chilly night camping at the local state park, my wife and I rolled into Spring Valley. This was the first unsupported event that I've done, and I was a bit of a basket case. I told her that if I had a fly on my bike shorts, it probably would have been unzipped.
After a few basic instructions, and the traditional singing of "Happy Birthday" to the organizer Chris's son Jack, the 1400 or so riders rolled out in a controlled start. Mechanical problems struck the group immediately. I saw for sure one rider with a flat within the first mile, and at least a dozen riders working on their bikes in the first ten miles. 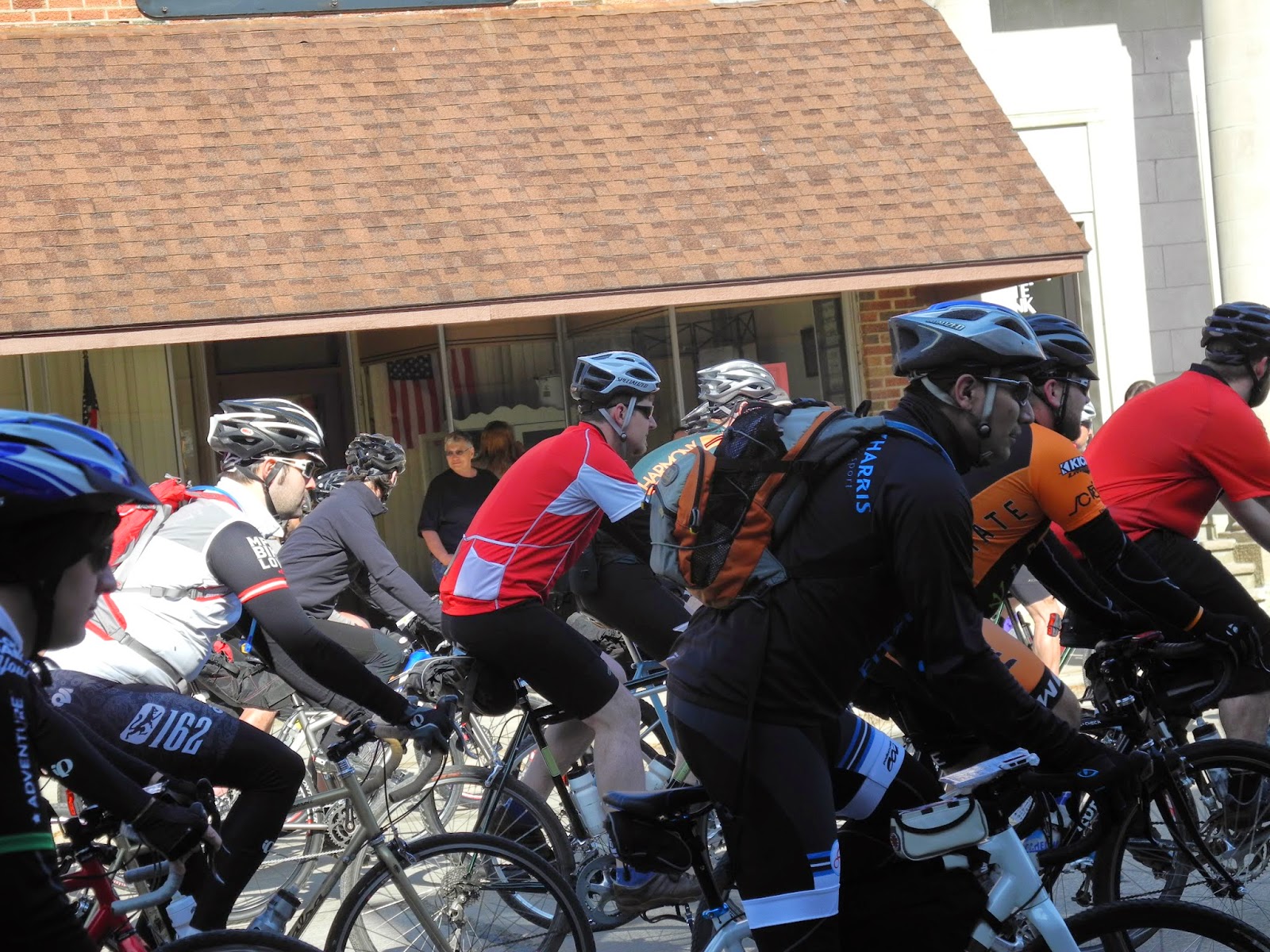 The first 40 miles went by in a blur. I was busy adjusting to riding in a group, getting settled in for a long day on the bike, and grappling with the different nature of the gravel in this area. The gravel is faster than what I am used to, and that coupled with a tailwind gave me an average speed in the 16 mph range. I found myself passing a lot, especially on climbs. Was I going too fast? Was I going to burn out? I tried to settle down, and mostly evened my pace out after the first big climb at mile 10.

I had arranged to meet my wife in Preston, which was the only place where outside help was allowed. As I got closer, I started texting her my mileage to give her a better idea of where I was on the course. Trouble was, I wasn't getting any response. I knew that cell signal was spotty, and nonexistent at our campsite. I also was coming into Preston at least 40 minutes ahead of schedule. I texted my arrival to her, and got a panicked text stating that she was on her way, but was 20 min out. Time for a nap and an assessment.

At this point I was feeling pretty good. My legs had plenty of zip in them, and my mood was good. My back was starting to become an issue though. On gravel rides longer than 20 miles, my lower back starts to hurt pretty good. Stretching usually helped, but I was worried about those stretches losing their effectiveness over the next 60 miles.

After the Preston stop, the ride became work. I now faced into the wind, and the elation of riding in groups was gone. Typically I could see one rider in front of me. I would catch that rider, then move onto the next. The enormity of the remaining ride, knowing about some of the nasty climbs coming up, put me in the lowest point of the ride. When I wasn't climbing, I was slugging in out with the wind. A welcome mood boost came when a cheerful volunteer along the road yelled "you're at mile 65, good job!" My bike computer, which I had suspected was off, was showing me at mile 60. Five free miles felt pretty good. Soon after that came the welcome Forestville Checkpoint.

There was Coke, beer, various salty snacks, and some wonderfully shady trees. But I didn't see any water. I had left Preston with just two bottles (a bit dumb) counting on a refill at this stop. I drank a can of Coke and headed out, WITHOUT ASKING ANYONE ABOUT WATER. Clearly I was 1) more fuzzy in the head than I realized, and 2) an idiot. I was heading out for the final 40 miles of this ride with two half empty bottles.

Not long after my departure, I realized my error, but resolved to keep going and hope that a second unofficial checkpoint from 2013 would still be in existence, or else beg some water from a local farmer. Then, about 20 miles later, I rolled into a small town and saw bikers massing around some small tents. It was perfect, and like a mirage out of a fever dream.

There was water(I'm saved!), Coke (nectar of the gods), Oreos(!), beer(later), whisky(nope) and a man dressed up like Elvis singing Devo. I'm not kidding.


Feeling hydrated and thoroughly tripped out, I headed out and soon snagged the end of a paceline. Not only did this group get me through a few rough miles, but sticking with them kept me from attacking hills as I had earlier in the ride. This section was made considerably easy by this gang, who I found out later was from Georgia. Thanks guys!

One of the fun features of the Almanzo is the river crossing. Last year they had to route around the river, since high water levels made the crossing borderline dangerous. No such issues this year. Some riders attempted to ride across the river, with about a 50% success rate. I found wading barefoot through the cold water felt pretty good.

Getting out of this river valley was especially fun, it was barely a road at all. Here, and throughout the course, the 40mm Clement MSO's really shone. They were stable, grippy, comfortable tires, and I love them.

My first and only flat struck not long after the river crossing at about mile 84. The group I was with continued on while I did a quick swap. Maybe it was the adrenaline from doing the repair, maybe it was the time spent off the bike, but for whatever reason my back stopped hurting after that flat. With just 15 miles to go, I knew I could finish, and with energy to burn I set my highest average speed since leaving Preston. I still ended up walking the last two big hills, but I used that time to keep limber, eat, and check cues. I knew my wife was waiting for me (with the headwind I was now a few hours behind schedule) and I wanted to be done, wanted that finish line, wanted to see her again after a long day.


After many hours of working through the miles, I remembered how fortunate I was to be here, in this beautiful place, riding a great bike surrounded by crazy people, with my wonderful wife running support.

Maybe it was just the endorphins and the adrenaline talking, but I was a happy to be so wrung out. The last 1/2 mile was on a city bike path, and I felt like I was flying. I got my handshake from Chris, (Thanks!) and shambled over to my wife.

I'm very happy with how the event went. I had no disabling injuries or mechanicals, and despite my best attempts to dehydrate myself, I finished feeling pretty good. Compared to other rides (notably a disastrous 55 mile day during RAGBRAI 2012 where I thoroughly freaked out my wife and brother) I was not dangerously exhausted.

Will I do Almanzo again? I'm not sure at this point. Even with the event itself being free, it still is an investment to travel here, and training took up a lot of my time. I'm definitely hooked on gravel riding, so we'll see what next year brings.